Dr. Williams (on the left) and me at the American Swedish Historical Museum. We are both pointing to the respective regions in Sweden to which we have familial ties. My great-great grandparents came to Minnesota in the 1880s.

As noted in a previous post, I invited Swedish runic scholar Henrik Williams to speak at a special event on November 14, 2016 at the University of Pennsylvania Museum of Archaeology and Anthropology. Dr. Williams is a professor of Scandinavian languages at Uppsala University in Sweden and cooperates with the American Association of Runic Studies (AARS), an organization committed to historically accurate, peer-reviewed, scientific analysis of runes and runic inscriptions. Henrik is also engaged in an educational partnership with the NFL’s Minnesota Vikings. Be sure to visit the team website for a series of articles and a video about accurate portrayals of Viking history.

Earlier in the day, I had the pleasure of escorting Henrik Williams and Loraine Jensen, president of AARS, to the American Swedish Historical Museum. We met with executive director Tracey Beck and got an insider’s tour of the museum with various staff members. After a short fika (Swedish coffee and refreshments), Henrik was put to work analyzing some runic text found on a ceremonial cane at the museum. He was able to determine that the runes were related to a calendar of holidays.

Readers of this blog may be unaware that the Swedes played an important role in the history of Philadelphia. Although the large migration of Swedes to the American Upper Midwest did not occur until the late nineteenth and early twentieth centuries, the Delaware River Valley was colonized by Sweden from 1638 to 1655. Although the colony was short-lived and eventually taken over by the Dutch, and later, the English, the Swedes had a lasting impact on the region. The Gloria Dei ‘Old Swedes’ Church is the oldest surviving church building in Philadelphia. The blue and yellow colors of Philadelphia’s city flag are said to have been chosen to commemorate the city’s Swedish heritage. The American Swedish Historical Museum was founded in 1926 to to preserve and promote Swedish and Swedish-American cultural heritage and traditions in Philadelphia and beyond.

Henrik, Loraine, and I spent much of the afternoon at the museum viewing the various exhibits. Before we departed for the evening’s Kensington Rune Stone lecture at the Penn Museum (to be discussed in a forthcoming blog post), Henrik presented me with a two gifts. The first was a copy of an excellent book called Runes by Martin Findell. It was published by the British Museum and it is an authoritative text on runic inscriptions. The second was a pin from Uppsala University. According to Henrik, the pin makes me an honorary member of the Uppsala University global community. I’m honored! 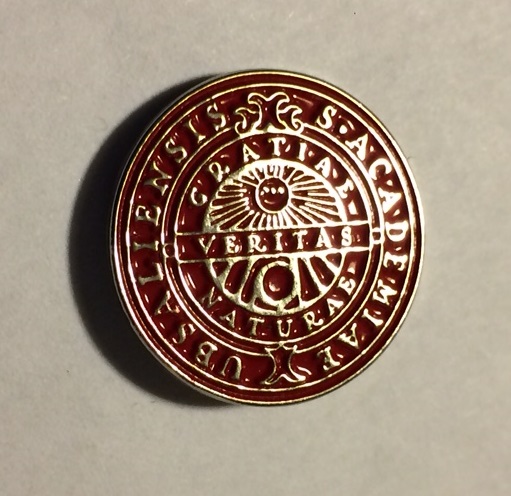 I look forward to returning to the American Swedish Historical Museum in the spring for their annual Viking day held on April 29, 2017 from 12 – 4 pm. I will be giving a lecture on the enduring popularity of Vikings in American culture. I very much enjoyed giving a presentation at last year’s Viking Day on my book Myths of the Rune Stone: Viking Martyrs and the Birthplace of America.