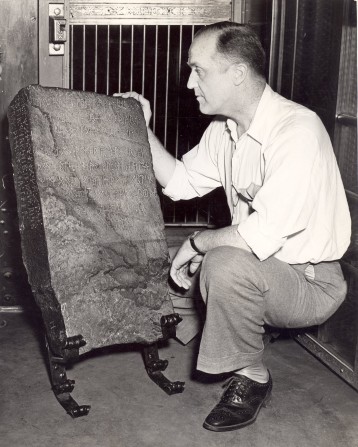 The central thesis of Myths of the Rune Stone is that the history of the Kensington Rune Stone phenomenon is a lens through which we can better understand the American preoccupation with founding myths. As a cultural symbol, Minnesota’s rune stone tells us a great deal about the aspirations, the anxieties, and the values of Midwesterners in the twentieth century. Whether the runic inscription was created in the fourteenth century or the nineteenth century is not the most important part of the story I tell. However, the process by which we discern historical and scientific validity is important to consider.

As my book outlines, rune stone enthusiasts have often relied upon bad science and bad history to make their claims. Although we live in an age when climate change deniers and anti-vaxxers are too often given a public platform to advance their psuedoscientific and dangerous views, the rune stone story shows that scientific literacy has long been problem for Americans.

To be fair, there are wildly varying levels of sophistication among those who tout the Kensington Rune Stone to be a genuine artifact of the fourteenth century. As I describe in the book, there are folks who rely on divination rituals like dowsing. There are others who claim mystical powers to interpret secret codes in the runic writing. However, it would be disingenuous to dismiss all rune stone enthusiasts as crackpots or hucksters.

Over time, I’ll be posting additional resources regarding the scientific arguments about the rune stone. Being that I am trained as a cultural historian and not as a scientist, I proceed with trepidation.

To be clear, I’m pretty confident that the rune stone is not what it claims to be on the basis of my reading of the best scholarship available on the topic. However, I’m no dogmatist. Historians can be wrong and we should always be open to new evidence. Rune stone enthusiasts frequently claim there is a conspiracy to hide the truth about the real history of North America. Don’t believe them. Below are some resources that will help you navigate the tricky questions posed by the Kensington Rune Stone.  The four relevant areas of analysis include linguistics, geology, archaeology, and history.

The language of the inscription…

The American Association of Runic Studies should be a first stop for those interested in the scientific study of rune stones. Professor Henrik Williams and Dr. Richard Nielsen are the key researchers in this organization, which is committed to historically accurate and peer-reviewed, scientific analysis of runes and runic inscriptions. They also coordinate academic exchanges between Sweden and the United States. Dr. Williams is a professor of Scandinavian languages at Uppsala University in Sweden and Dr. Nielsen is an independent researcher who has studied the stone for decades. For an authoritative book on runic inscriptions, you should read Runes by Martin Finell. It was published by The British Museum in 2014.

The physical properties of the stone…

The physical aspects of the stone and the inscription grooves have also been studied in detail. The first geologist to study the stone, Newtown Winchell, published a report in 1909, in which he concluded that the inscription was “not a modern forgery.” However, a more recent assessment by Paul W. Weiblin, a geologist from the University of Minnesota has argued that it is extremely difficult to date inscriptions with any accuracy. Furthermore, in a 2008 article published in the Kansas Anthropologist, John D. Reynolds demonstrated how in 1913, Winchell had mistakenly identified a forged inscription from the nineteenth century as one that dated back thousands of years.

Hjalmar Holand identified several boulders with chiseled holes throughout the Minnesota landscape claiming that they were evidence of a Norse presence. Holand asserted that they were chiseled out by the Norse in order to hold anchor pins for their ships. Archaeaologist Tom Trow researched these “holey boulders” and determined that these holes were likely drilled out by farmers in an attempt to blast them into pieces with dynamite. You can read his article in the Minnesota History magazine here.

Holand also touted several purported Norse artifacts (swords, battle axes, etc.) that Minnesota farmers had found in their fields. Archaeologist Birgitta Linderoth Wallace researched these artifacts and determined they were of recent origin. The so-called Ulen Sword discovered by Hans O. Hansen in 1911 was believed by many to be an authentic Viking sword. In reality, it is a replica of a French military sword and had been manufactured in Philadelphia in the early 1800s. For more information, see Wallace and Fitzhugh’s chapter “Stumbles and Pitfalls in the Search for Viking America” in Vikings: the North Atlantic Saga.

Since the 1960s, we have known the Norse explorers had reached North America by around the year 1000 C.E. The remnants of a Viking village were uncovered on the northeastern tip of Newfoundland. In 2016, new evidence was identified that could indicate they had reached the southwestern tip of Newfoundland. The Newfoundland settlements were likely abandoned due to hostilities with native residents. There is no evidence as of yet that proves the Norse continued exploration after the eleventh century and certainly not into the middle of North America. For a superb analysis of Norse exploration in North America, consult Annette Kolodny’s In Search of First Contact: The Vikings of Vinland, the Peoples of the Dawnland, and the Anglo-American Anxiety of Discovery (Duke University Press, 2012).

The anthropologist Alice Beck Kehoe has done extensive research on pre-Columbian North America. She also wrote a book called The Kensington Runestone: Approaching a Research Question Holistically. Although most other scholars contest her claim that the Kensington Rune Stone is authentic, her arguments about the possibility of early Norse explorations of central North America are worth considering.

There are several websites and recent books by rune stone defenders. Again, there are wildly varying levels of sophistication. Many writings ought to be relegated to the domain of fantasy rather than credible history. It is unfortunate that the the public is often ill-equipped to discern the difference.

One thought on “Real or Fake?”